I have the fondest memories of the Jalan Besar area. I remember my dad taking us to the Jalan Besar Stadium to watch football matches in the heyday of the sport in the 90s. The atmosphere was simply electric; people would be singing in unison and cheering on the Lions to frenetic drum beats. We also visited the Sungei Road market (known to locals as the “Thieves’ Market”) once in awhile to kill time on Sunday afternoons … it was where you could get anything from stools to vinyl players and even car engine parts (though, for obvious reasons, you never asked about the origins of the items!).

When my fiancé Alain was back in town over the weekend, was decided to stay at Kam Leng Hotel on Jalan Besar just opposite Lavender Food Square We’d been to the hotel’s restaurant Suprette a few months ago and was curious to see how they’d restored the rooms of this old Chinese hotel, which was apparently established in 1927.

The hotel offers three types of the rooms: standard queen, superior queen, and executive queen, with the first and last categories being the smallest and largest respectively.

We’d made a booking via agoda.com, and ended up paying about $130 per night for the superior queen (inclusive of taxes). When we checked in, we were given the standard queen (the smallest room) by mistake.

When we opened the room door, we were, quite frankly, appalled. As Alain put it, “This is not a room. It’s a broom closet!” The queen-sized bed took up close to two-thirds of the room, and there was only space for a small dressing table. The bathroom was literally two steps away from the bed. The worst part was, the room didn’t have a window! If you have mild claustrophobia like I do, you would not be able to stay in there for 10 minutes without going bonkers.

Kudos to the staff at the reception though. When we informed them of their mistake, they immediately upgraded us to the largest category of rooms, the executive queen.

The room, though not large, was comfortably sized for a couple. Don’t expect it to have all the trimmings of a regular hotel though. It’s pretty basic, with a fridge, hairdryer and shampoo and conditioner coming out of a dispenser by the shower.

To me, what stands out about this hotel is not so much the rooms as much as how the place was restored. Instead of hollowing out and re-doing the interior completely, they left some of the original elements of the hotel intact, such as this sign pointing to what was previously a restaurant on its top floor (it’s no longer there). Judging from the worn condition of some of the tiles in the building, I’d hazard a guess that they are original. The staircase still had peeling plaster on it, which I found quite charming. I guess this is what they call “shabby chic”.

I found the listed room rates at Kam Leng a bit steep, it starts at $200 for the standard queen (the broom closet), and goes up to $300 for the executive queen (what we ended up staying in). You’ll find better deals online so be sure to test out travel sites like Agoda or AsiaRooms before you make a booking.

Anyway, you wouldn’t be spending much time in the room, not when the area surrounding the hotel is calling out to be explored. The Jalan Besar area is famed for its culinary offerings, and this is a place where you can never go hungry, no matter how late it gets. Lavender Food Square just across the road from the hotel is home to the famed Kok Kee Wantan Noodles. You can never miss it as it’s the stall with a permanently long queue. My only gripe about this stall is that the portions are measly. A “big” plate of noodles that costs $5 will only get you two pathetic wantans and a few pieces of char siew, though its sauce is undeniably tasty.

But it’s just as well as the you don’t fill yourself up on the noodles, because the other stalls have fab offerings as well. In particular, I like the pork stall which serves meat balls, spine meat and pig’s organs soup, as well as the stall opposite which sells popiah and carrot cake. The food court also houses the famous Eminent Frog Leg Porridge, if that’s your thing.

Walk down the road along Jalan Besar and you’ll find other gems such as Swee Choon Dim Sum (at the corner of Desker Road and Syed Alwi Road). We headed there for an early dinner and it turned out to be a great decision. By the time we finished our meal and left at 6.45pm, there was a snaking queue with hordes of people on the five-foot way waiting for a table! When you’re there, you HAVE to order the Swee Choon Mee Suah Kueh. It’s essentially like a carrot cake – only with mee suah instead of radish. Pan fried to golden goodness, it was crispy on the outside and oozing with the mushy and familiar goodness of mee suah on the inside.

I didn’t time to sample all of Jalan Besar’s offerings, but the following places: Beach Road Scissor Cut Curry Rice (just before Kitchener Road if you’re walking from the direction of Kam Leng); the prata shop at Rowell Road; and Windowsill Pies (78 Horne Road) all came highly recommended from friends.

One of my favourite restaurants of late, Suprette, lies within Kam Leng Hotel itself. When I’m there, I always order the Hangar Steak with Marrow, $29. The slab of steak is generously portioned and cooked to perfection, and both the marrow and the steak are topped with caramelised onions on a huge serving of fries. Simply delish!

All in all, I’d recommend Kam Leng Hotel for flashpackers who want to experience a slice of real Singapore away from the glitzy hotels and posh nightclubs. However, they should test out several travel sites to score the best deal.

Material World paid for its own stay and meals at Kam Leng Hotel. All opinions expressed are the author’s own.

About the tác giả: Denise Li is a người sáng lập of Material World and a freelance writer-editor. Before that, she spent a few years in the Features section of CLEO and Cosmopolitan Singapore. She considers Chiang Mai her spiritual home and makes it a point to head there for a yearly pilgrimage. She’s also a fitness buff and enjoys boxing, running and the occasional yoga session. Lastly, she believes that everyone should make it a point to travel solo at least once in their lives. Follow her on Twitter @DeniseLiTweets

Who’s Up For a 4D Adventure?
Singapore’s Top Kid-Friendly Restaurants
Life’s a Beach in Terrenganu 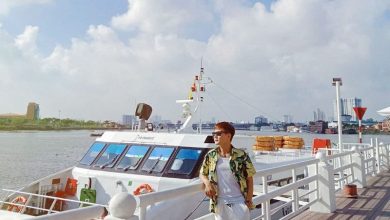